One thing you notice in the cities of Scotland is the abundance of steeples. Perth is no exception.

Dear reader, in case you are not familiar with the ABC Tour, this is the part of our travels when we visit Another Blessed Cathedral. The ABC Tour is a series of mini-tours we have been doing for over two years, and we have witnessed some of the most spectacular art, architecture and antiquities imaginable.

We can see the Perth Cathedral steeple from our flat.

Florence, like all her ancestors, was raised Catholic. She even attended a Catholic boarding school, which accounts for her exceptional preparation for post-secondary school. Upon entering a cathedral, Florence observes reverent moments of contemplation and dutifully lights a candle in remembrance of those who are the subjects of her prayers and blessings.

I also stand in awe of the size, scale and sophistication of the art and architecture of the sites we visit, albeit from a different perspective. The symbols of Christianity are not new to me. I learned enough in my Protestant upbringing to comprehend both New and Old Testament teachings, enough so that I can appreciate the imagery in all of its glory. I am awestruck by the creations of artists and craftsmen who designed and built these great cathedrals. One cannot help but be moved by the grandeur or the works. 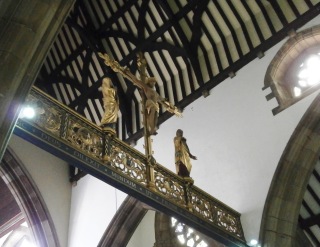 The Gothic ceiling towers over the altar.

There is so much history behind each cathedral we visit. For example, here in Scotland, the Catholic Church rivaled the great monarchs and land barons in its wealth and power. After The Reformation when the Anglican Church broke away from the Roman Catholic Church, the church still shared the power and wealth of the country. In order to have a place in the church, one had to purchase a seat in the congregation. So it was that the poor were left out.

The Perth Cathedral interior is spectacular.

During the period of The Enlightenment, when scientific thought supplanted ignorance and superstition, the common folks in society demanded a say in how they were governed in the wake of the French Revolution and the introduction of parliamentary rule. This was true also in the way people worshiped. In 1843, there was The Disruption, when over 400 ministers and their congregations broke away from The Church of Scotland. When these congregations had the means, they erected their own churches as The New Church of Scotland. By 1929, a compromise of sorts reunified the divided churches. However, neither church regained its former stature. 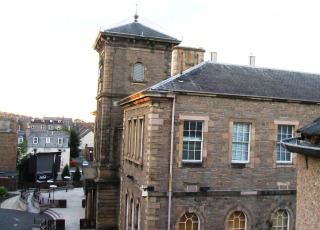 The North Church behind our flat is only open on Sunday.

The Church of Scotland used to preach from the pulpit the principle of Sunday as a day of worship. However, the schism in the church led more and more people to find other things to do with their time. With the advent of radio, television, organized sports and even Sunday shopping, church attendance in Scotland continued its decline. Contributing to this decline was the fact that women formed the majority of church membership, and women were denied the right to be ordained until 1968. 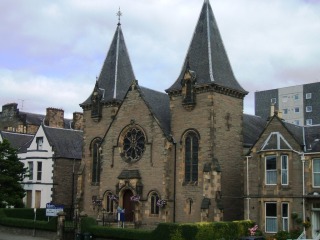 Not every church is open to us, like the Church of the Nazarene. Still, it is an interesting building.

The decline in church attendance is why you now see many church buildings in Scotland that have been sold to private businesses housing restaurants, night clubs and offices. I was surprised to learn that today in Scotland, the largest denomination of churchgoers is Roman Catholic. I have learned a lot of interesting history on the ABC Tour.

Vendors set up awning covered booths for the Saturday Market. Hundreds of people flock to King Edward Street to contribute to a fair-like atmosphere.

Vendors from around the region set up booths just off High Street in Perth from 9:00 a.m. – 2:00 p.m. on the first Saturday of each month (and twice in December).  So we grabbed our re-usable grocery bags (which are needed here) and set out to beat the midday rush.  There are about 30 canopies along King Edward Street, few enough that we can stroll by each one and then go back to our favorites.  And that is just what we did.

The seafood table had cooked lobster, crab, and fresh salmon. Haddock and sole were the top sellers. The was the busiest booth at the Market.

This fellow’s apron reads ‘I Love Hot Pepper Jelly.’ As it turns out, so do I, so I got some. The back label reads ‘After opening store near your plate.’ I love that!

Paul, the beer guy from St. Andrews told us his company was owned by an American who came to St. Andrews to play golf.  When he asked what the local beer was, he was told there wasn’t any.  So he funded a brewery.  His name is Peter Coors.  After sampling a few I bought some to take home. 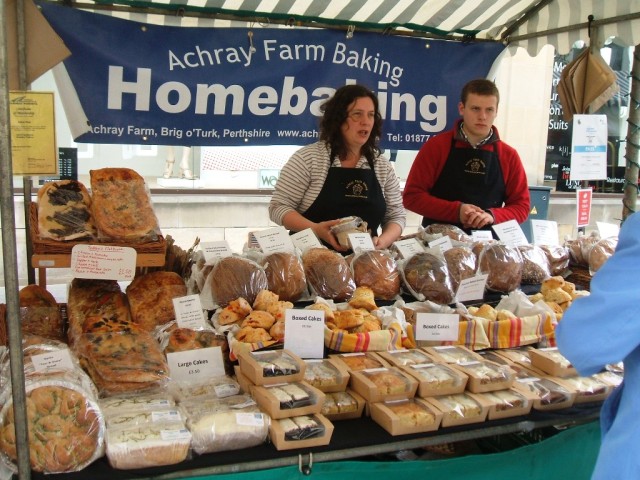 These breads were amazing.  We bought loaves of whole grain sourdough and hazelnut bran. We also got some scones and some of that cake you see in front.

Let’s see, we bought ginger cheddar, cranberry cheddar, grilled onion cheddar and cheddar with chives.  Do you see a pattern here?  She got us with the samples!

Fresh berries are still in season, so we got some raspberries.

Homemade candies – what do you think?

We could have eaten at the Market, but we had already purchased enough.  We saw much more, too.  The people were open and friendly.  They even seemed to like our “American accents.”  Hmm – I never knew I had an accent.