One of Gaudí’s earlier projects, La Pedrera incorporated innovations like a self-supported façade and underground parking. Under renovation during our visit, this photo is from Wikicommons.

My first surprise about Barcelona, a metropolitan area of five million people, is that the city is only about 150 years old.  The roots of the city go back to Roman times, but the city as we see it now has few remnants older than the mid-19th century.

Gaudí loved color. He did not much like square corners.
Photo credit: Wikicommons

Barcelona underwent major changes in the 1800’s.  In a controversial move, the powers of that time decided to tear down the medieval wall that contained the city.  Along with the wall, many medieval era buildings were also demolished.  A master plan was developed which included plazas, parks and tree-lined streets that were over 100 feet wide with wide sidewalks.  Although some property owners fought these zoning restrictions, today Barcelona has lots of wide boulevards, plazas with beautiful artwork, and public parks providing spectacular vistas of the city.  The result today is a feeling of wide open spaces with lots of light, nice breezes and lots of green space throughout the city.  Further improvements were made in preparation for hosting the 1992 Olympic Summer Games, including new beaches and modern construction.

Stylish architecture is what catches my eye in Barcelona, and none is more striking than the inescapable designs of Antoni Gaudí.  I was prepared to be amazed by the unusual shapes and bright ceramic touches of Casa Batlló, Park Güell and other famous Gaudí works.  I was hardly prepared for the spectacle that is La Sagrada Familia, the Catholic Basilica of The Sacred Family.  As we walked from the nearby Paseo de Sant Joan, my heart began beating faster as the glory of spires towering more than 500 feet over my head came into view.  Everything about La Sagrada Familia demands that I look up. 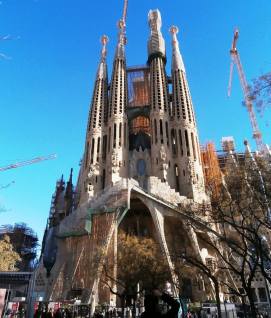 The spires of La Sagrada Familia pierce the sky over 500 feet above street level.

I can hardly get my head around what I am seeing.  Is this art?  Is it architecture?  Is it the creation of a crazy man or a genius?  What sort of mind is able to bring such a remarkable vision to reality?  These thoughts go through my mind as I gaze upward in amazement and awe.  Interior pillars start out five feet in diameter at their base.  As my eyes follow their upward taper, they seem to grow sixteen evenly space ridges.  These ridges split in two as I follow the lines upward.  The vertical lines then dissolve until further up the column is perfectly round.  Suddenly, the column splits into multiple branches that taper and disappear into the ceiling they support.  The effect of the multiple pillars is like a forest of giant trees supporting an elaborate ceiling 200 feet overhead.

The West entrance to Sagrada Familia is also the oldest. It depicts the Nativity in sculptures high over the portico.

La Sagrada Familia was not completed in Gaudí’s lifetime.   In fact, the construction that began over 130 years ago continues to this day.  This was not a commissioned project.  Gaudí utilized only money that was donated in order to carry out the construction.  To this day only donations from entry fees and benefactors are used to pay for the construction.  It is estimated that 2.8 million persons annually visit La Sagrada Familia.  The base admission is about $27/person without a personal guide or audio guide and exclusive of a trip up one of the towers.  The two newest towers are equipped with ultra-modern elevators. 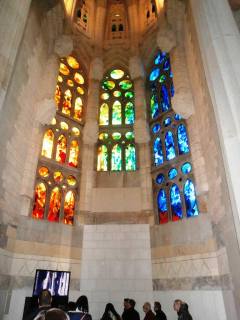 The interior of Sagrada Familia is light and open. Color is added with the extensive use of stained glass windows.

Gaudí believed that all great efforts required sacrifice.  He felt paying the ongoing costs of constructing La Sagrada Familia was exactly the sort of sacrifice that was required to achieve success.  It is estimated the project could take ten or more years to complete.  I do not think Gaudí would mind.

In 1926, Antoni Gaudí was struck by a tram on his way to his local church.  He was knocked unconscious and taken in a coma to the hospital.  No one recognized him at the time.  During the night he awoke and asked to have last rites administered.  He died later that night.  He is now buried in the crypt below the main altar of La Sagrada Familia.  Catholic masses are conducted there daily. 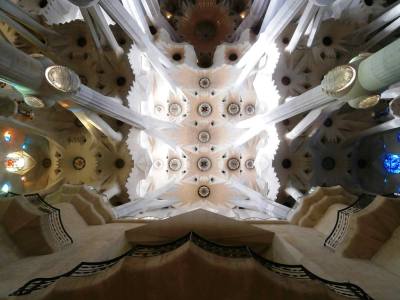 The elaborate ceiling is braced by the many-branched columns soaring 200 feet overhead.

The colors and details throughout the cathedral dazzle the eyes.