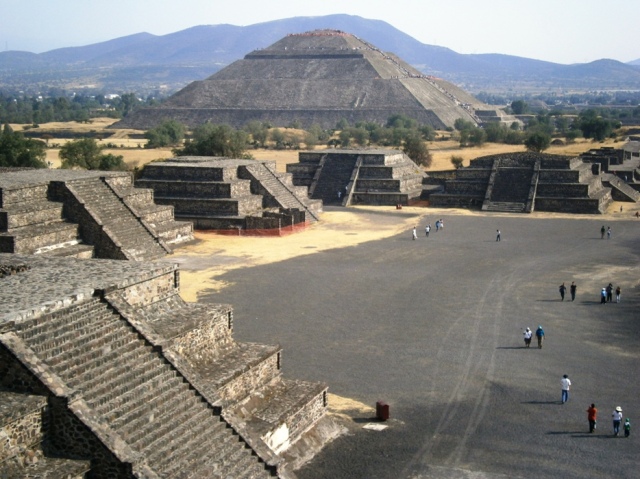 Visitors at the base of the pyramid at Cuicuilco are walking on a 30 foot deep lava bed.

The story of Teotihuacan in Central Mexico starts out around 800 BC at a place 40 miles away at a site known today as Cuicuilco (Place of Songs and Prayers in Nahuatl language). Cuicuilco was the ideal location on the southwest shore of Lake Texcoco in the heart of the Valley of Mexico. Natural springs provided a year round flow of fresh water from the nearby mountains. The soil was ideal for cultivation, and lake fish supplemented the diets of the people. For a thousand years settlement took place all around Cuicuilco as denizens of the region discovered its perfect climate and resources. Then suddenly, Mt. Xitle violently erupted just 2 miles to the south. Most of Cuicuilco is now entombed under a thirty foot layer of lava rock.

The Avenue of the Dead was most likely named by Spaniards who thought the many temples were tombs.

Cuicuilco was hastily abandoned by the 20,000 or so residents in need of a new place to live. Since all the best settlement sites in the valley were now taken, the people of Cuicuilco were forced to keep migrating until they reached a forested plain far to the northeast, and there they founded Teotihuacan. Unwittingly, these early settlers found themselves at the crossroads of the major trade routes in the region. What started as a humble settlement grew to become the greatest trade city in the hemisphere, fueled by the discovery of obsidian.

The Temple of the Moon marks the north boundary of Teotihuacan.

The people of every region relied on obsidian for tools, arrowheads and spearheads. Teotihuacan grew and prospered thanks to the obsidian trade, and military force was utilized as necessary to squelch any serious competition in order to maintain their monopoly. At its peak around 600 AD, Teotihuacan had about 250,000 residents, which would have made it the sixth largest city on Earth at the time, and its history of prosperity spanning over 800 years is still a subject of study.

Archeologists discovered tunnels 30 feet deep leading to a room beneath the temple’s center.

Archeologists have noted the main road in the city, oddly referred to as the Avenue of the Dead, is laid out on a line 15° 30’ east of north. Given what we know of their precise systems of measurement, this oddity is not a mistake. The largest temple in the city, The Temple of the Sun, holds the key. The west side of this pyramid faces the exact spot on the horizon where the sun sets on the two dates that the sun is directly overhead at midday, May 16 as the sun passes northward toward the Tropic of Cancer, and July 28 when the sun is returning toward the equator. The line from this temple to the setting sun is exactly perpendicular to a line 15° 30’ east of north.

The west side of the Temple of the Sun, third tallest pyramid in the world, teems with people before sunset.

We experienced an amazing phenomenon on our Teotihuacan tour. We stood before a pyramid about 20 feet back from where the steps ascend on the side, and we clapped our hands. The echo of the sound came back as a “chirp.” We learned this echo has the identical sonic signature of a quetzal when it chirps. Knowing that the ancient civilizations of Mesoamerica worshiped the quetzal as a symbol of nobility, it was like hearing the echo of history with our own ears.

16 comments on “Teotihuacan – Echoes from the Past” 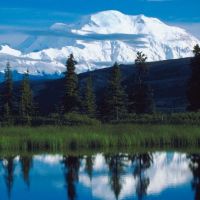 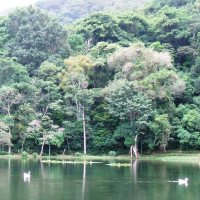