The Romans may have had this view from the Island of Kornat.

To fully appreciate Croatia’s natural beauty, one needs to visit some of the 1,000+ islands that make up the Dalmatian Archipelago.  Seagoing vacationers have long enjoyed the quiet coves, sandy beaches, hiking and biking paths and boutique hotels tucked comfortably in their secluded venues.  However, a charter boat or water taxi can open this private world to any interested traveler.

Fortunately, Croatia has seen fit to preserve some of their island treasures as national parks.  I explored two of these island national parks, and each could not be more different from the other.

Rock cliffs tower over our boat like giant sea monsters.

Kornati National Park is about 30 miles up the coast from Šibenik (SHE beh nik).  The park includes the island of Kornat, largest of the 89 islands in the park.  Our charter boat took us around several islets with high cliffs that plunge 200 feet vertically down into the depths of the clear, turquoise sea.

Other than scattered shrubs and trees, the islands seem largely barren.  On the main island, Kornat, we climbed to a promontory ruin believed to have Roman origins.  It is hard to tell, as we were informed by our captain, Emil, that a film company had rebuilt some of the ruins for a film set some years ago.  Even so, it was not difficult to imagine that the Romans had used this site as a lookout vantage point.

Some ancient ruins were probably part of a movie set.

The magic of Kornati National Park becomes apparent below the water’s surface where you will find a diver’s paradise.  These protected waters feature 352 confirmed species of algae, 22 corals, 177 mollusks, 160 fishes, 55 crab species, plus indigenous sea grasses and countless organisms that have yet to be identified.  In addition, large numbers of bottlenose dolphins and loggerhead turtles make this habitat their home.  If you are a diver or snorkeler, you must discover Kornati National Park for yourself.

The saltwater lakes are connected by manmade canals.

The western part of Mljet (mul YET) Island was declared a national park in 1960.  In brilliant contrast to the stark islands of Kornati National Park, Mljet features inland lakes.  They are not really lakes, but rather natural depressions that were flooded by the rising sea after the last ice age.  These are actually saltwater lakes connected by a small channel to the sea.  Because they are shallow and landlocked, the lakes are several degrees warmer than the sea and make for excellent swimming for nine months out of the year.  Visitors often rent bicycles to casually peddle around the forested shores of these lakes in shaded comfort. 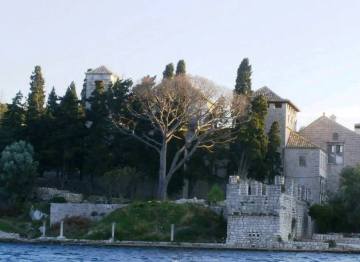 The monastery is accessible only by boat.

If you get too warm, there are lakefront café bars called konobas where you can stop to refresh yourself.  If you are seeking refreshment, you should remember these two words – Ožujsko and Karlovačko, the Croatian equivalent of Budweiser and Miller.  Every konoba will have one or the other.  I occasionally enjoyed a variety called lemon Radler, made by both Ožujsko and Karlovačko, which is only 2% alcohol and tastes a lot like San Pellegrino limonata – very refreshing!  It is also sold in grapefruit and orange flavors at the supermarkets.  If you are stopping for lunch, let me caution you to allow at least 1½ hours for eating.  Dining in Croatia is not a hit-and-run activity.

Ruins of St. Paul’s Church built on Mljet Island in the 4th century. I think they had a very small congregation.

Mljet Island has something for everyone – sandy beaches, Roman ruins, a 4th century church and the Santa Maria Benedictine monastery that is being refurbished and is open for visitors.  Even the Greek poet, Homer, wrote about the island in The Odyssey.  Some believe this is the island upon which Odysseus was shipwrecked.  There is a sea cave that could match the description in Homer’s story.  Mljet is also a great island getaway with lovely resorts and hotels suitable for families or for a romantic holiday for couples.

One thing is certain.  If you are interested in a special vacation of a lifetime, then you owe it to yourself to consider the islands of Croatia.  Once you go, you will be like me – looking forward to the day when you can return.